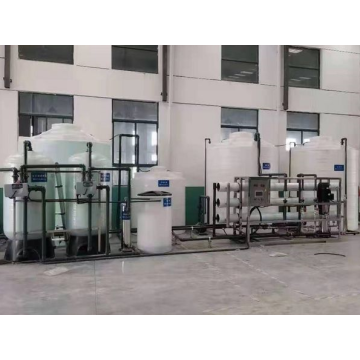 Medical and biological industries, different from Other industrial water, the quality of pure water also needs to apply different specifications, but generally according to the following process, the equipment material is stainless steel 304 or 316, to prevent the material from separating other substances to cause water pollution. Try to use quick-fit active joints as much as possible, and avoid using products such as silk teeth.
1. Medical pure water equipment-automatic backwashing multi-media filter

The multi-media filter tank is filled with quartz sand and other filter materials. Its effect is mainly to reduce the turbidity of the water, and it can remove a lot of sediment and impurities in the water, thereby creating favorable conditions for the subsequent disinfection process. It can also be filled according to the actual situation. Manganese sand and manganese sand have obvious removal effects on iron and manganese.
2. Medical pure water equipment-automatic backwashing activated carbon filter tank

Activated carbon has many micropores and huge specific surface area. The coconut shell activated carbon with high iodine value adsorption capacity of 1000-1200 is selected. It has strong physical adsorption capacity and can effectively adsorb impurities in water, especially organic matter and microorganisms. The function of oxygen-containing catalytic oxidation and chemical adsorption formed on the surface of activated carbon can remove part of the metal ions in the water. It can remove part of the remaining chlorine in the water and has a strong adsorption effect to prevent the reverse osmosis membrane from being oxidized.

The softening tank is filled with sodium-type cation exchange resin. After the ion exchange reaction of the resin, the hardness of the water is reduced, and the calcium and magnesium ions are prevented from combining with carbonate and sulfate ions and scaling in the subsequent reverse osmosis water treatment equipment or pipelines.

The fine filter is also called the security filter, and the filtration accuracy is generally 5um. The effect is to retain substances larger than 5um to meet the water inlet requirements of reverse osmosis.

Electrodeionized water device also belongs to the ion exchange system (EDI), which is a new method of ion exchange. This ion system uses a mixed resin bed, selects selective permeable membranes and chargers to ensure continuous water treatment Continuous regeneration with resin, the treatment process is that the raw water first enters the resin section. When the water passes through the resin, it is stripped of metal charge ions and becomes product water. The resin used in this system can be regarded as a conductor and has the effect of potential energy. Under the pressure, the captured anions and cations are forced to pass through the resin and permeable membrane to be concentrated and released from the water stream. At the same time, in the resin section, the potential energy of the electric potential electrolyzes the water into hydroxide ions, so that the resin can be continuously regenerated without adding a regenerating agent.

Ozone is a strong oxidant, and its oxidation function is second only to fluorine among natural elements. Ozone can oxidize and differentiate all the necessary glucose oxidases, etc., to oxidize sugar inside the bacteria. It can also directly interact with bacteria and viruses, damage the effect, damage cells, ribonucleic acid, differentiate DNA, RNA, protein, lipids and polysaccharides and other macromolecular polymers, and use bacteria to metabolize and grow and multiply. The process is damaged. . Deodorizes in water treatment.

Circulate backflow to prevent bacteria from multiplying. Pretreatment system in pure water system. The water production system and the water system are separated with circulating water channels. When the water is not used on holidays or at night; when the pure water tank is full and the conductivity of the effluent exceeds the standard, the water in each system maintains a certain degree of circulation, and when necessary, supplemented with ultraviolet or Ozone sterilization prevents bacteria from multiplying.